Globalization Stuck In The Mud Or In Full Retreat? 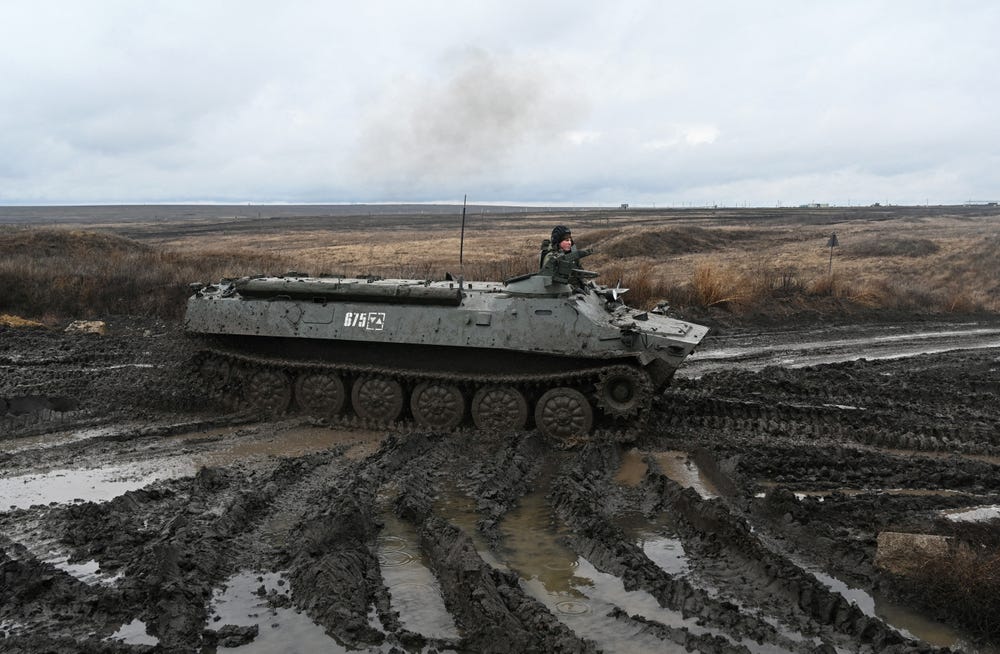 Ok, hopefully this particular attempt to link the horrors of Ukraine and commercial freedom won’t incur the disgust of 500 million Europeans. I wasn’t invited to the European Council meeting anyway but ‘Global Britain’ and Boris Johnson would probably have had loftier ambitions. Oh well, welcome to the new world order. Or should I say disorder? It is not just Russian tanks about to get bogged down in the melting Raputitsa mud of Ukraine.

Globalization has stalled, and is possibly in retreat already, as the consequences of a shocking European war of aggression reverberate around the world. However, it would be a mistake to think de-globalization began by cutting off the 11th largest economy in the world, Russia. It’s not just about Russia, it’s about much more. Here are a few illustrative headlines pointing to the stresses building in the world order over recent years….

Note how these headlines are not new but, in aggregate, appear to challenge the traditional positive drivers of globalization. Since 1991 the global economy had benefitted from increased competition, new markets, international capital, shared technologies and political tolerance. However, when capital, talent and technology are free to move it can lead to significant regional shifts in wealth. The world was a winner but there were losers too…. Ask the American rust belt or the UK’s fading industrial base. So, when the financial crisis shocked the global economy in 2008 and triggered an evaporation of trust between banking institutions something rather more significant happened. Sovereign nations in a battle for financial survival and to support their domestic economies adopted a more inward-looking approach. The following striking data seems to confirm this too….

In 2020 the Peterson Institute for International Economics (PIIE) published a report showing globalization in retreat for the first time since World War II. More interestingly, PIIE had used a measure called “global trade openness” to illustrate that the “slowbalization” had begun more than 10 years earlier. Global trade openness is calculated as the ratio of world exports to world GDP and shows globalization peaking at 61.1% in 2008 but falling to 53.5% by 2017. Here’s the PIIE chart: 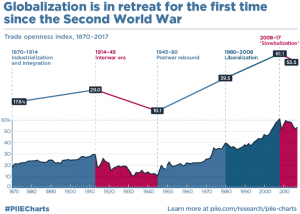 Arguably, globalization is not just measured by trade. There are cultural and political integration dimensions to the concept too. So, these dark days in Europe are certainly not helping to move the dial in a positive direction, and all eyes will be on the following areas:

Previous articles here have highlighted the significance of Ukrainian and Russian agricultural output in the global food chain. However, we also mentioned ammonia-based fertilizers which are dependent on gas inputs/feeds. Fertilizer prices have quadrupled while grain prices have doubled. This margin crush massively disrupts the yield management strategies in agriculture everywhere. Note this is not just a Ukraine-Russia output issue. The global future planting season is now at risk. And be aware that the entire planet operates on a 90-day food supply basis.

This crisis won’t take long to manifest itself and we should note the words of Tony Will, CEO at fertilizer giant, CF Industries – “My concern at the moment is actually one of a food crisis on a global basis”. Check out the daily headlines of individual countries banning exports of certain foods – see Indonesia, Serbia, Hungary, Egypt, Algeria etc. The hoarding has begun and the poorer countries will suffer first.

Countries planning to do bad things will note the Russia experience: gold confiscated, bank accounts frozen, stock exchanges shut, credit cards blocked, payment services suspended, yachts seized and central bank reserves frozen. International outrage at Russian war crimes has allowed for little debate on these moves other than noting that the UK government wants to criminalise Ukrainian refugees without paperwork but give peerages to Russian oligarchs with dubious (news)papers. However, a more serious consideration needs to apply to the final sanction in the list above.

The freezing of central bank reserves and exclusion from the US dollar reserve currency ecosystem will have a long-term impact on international finance. Leaving aside rogue states, all nations will note that the US and China relationship is fraught. Now consider that China is the largest trading partner for the majority of nations. It is not inconceivable that these countries could see a Taiwan crisis coming down the tracks and potential US pressure to choose sides. Who’s your dollar daddy now? Watch out for interesting FX moves in US dollar currency pairs(Saudi Riyal?) and increased sovereign wealth interest in central bank digital currencies(CBDC).

If countries are forced to choose geopolitical sides on trade partners whither technology? Readers will probably already know about security concerns in the West re Chinese technology platfoms. Leaving aside TikTok personal data or Huawei 5G national security issues, the past 12 months have seen China’s own government make life very difficult for its technology sector. So much so that JP Morgan last week highlighted, like us, the implosion of China technology share indices by as much as 70% from their 2021 highs. Thankfully, we didn’t call China tech “uninvestible”, like the US investment bank’s research unit, as the Chinese authorities are suddenly showing some soothing tech love and have pledged equity market support. The 65% jump in the share price of e-commerce giant, Alibaba, in just one week’s trading might amuse investment bank analyst-bashers but should really raise strategic alarm bells.

Technology, the great global connector, is very much a political instrument these days. Possibly more. It is striking how unwilling the West is to unleash cyber damage on Russia. Perhaps there is a realisation that super-power weaponry has extended to mutually assured technology destruction? The bigger question for me is how the internet and other technology platforms could fragment and reflect sovereign security concerns. We note China’s alignment with Russia so far and India being curiously quiet (but probably distraught to see how badly Russian military equipment is performing on the Ukrainian battlefields) and start to think about an internet decoupling. What happens to marketing strategies, digital commerce and Silicon Valley valuations if two thirds of the planet’s middle class are not just located in India and China by 2030, but on an entirely different digital ecosysyem?

The above watch-list may feel a bit like a Twitter doom-scroll but crisis and risk aversion has historically prompted new thinking and innovation. Indeed, World War II brought us penicillin, radar, jet engines, flu vaccines and computers. So, as we digest the risk list above, we should also think about the search for regional alternatives with global impact. Two areas in particular could see acceleration with a global benefit:

We have challenges ahead but we should be careful to measure globalization in terms of trade alone. The planet and its people should be a primary consideration in any re-set of globalization. They also could be our opportunity as we might be about to find out in Ukraine. What chance the melting mud plains of Ukraine and its fiercely brave defenders force a mass Russian troop surrender? Just thinking…..